Pediatricians: Teenagers Need To Sleep In 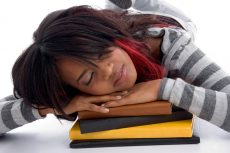 With the vast majority of American schools back in session, it’s time to get back to what’s becoming an annual discussion — school start times.  This year, pediatricians are throwing their weight behind the argument that school for teens needs to start later.

In a new policy statement, the American Academy of Pediatrics (AAP) is recommending that middle and high schools delay the start of class to 8:30 a.m. or later.  The AAP says starting school later will align school schedules to the biological sleep rhythms of adolescents, whose sleep-wake cycles begin to shift up to two hours later at the start of puberty.

“Chronic sleep loss in children and adolescents is one of the most common – and easily fixable – public health issues in the U.S. today,” said pediatrician Judith Owens, MD, FAAP, lead author of the policy statement.  “The research is clear that adolescents who get enough sleep have a reduced risk of being overweight or suffering depression, are less likely to be involved in automobile accidents, and have better grades, higher standardized test scores and an overall better quality of life.”

Many studies have documented that the average adolescent in the U.S. is chronically sleep-deprived and pathologically sleepy. A National Sleep Foundation poll found 59-percent of 6th through 8th graders and 87-percent of high school students in the U.S. were getting less than the recommended 8.5 to 9.5 hours of sleep on school nights.

The AAP says that napping, extending sleep on weekends, and caffeine consumption can temporarily counteract sleepiness, but they do not restore optimal alertness and are not a substitute for regular, sufficient sleep.