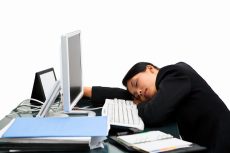 While we all want an office in our workplace, it turns out you’re better off just asking for a window.

An interdisciplinary team of architects and medical researchers recently conducted a small case study comparing people exposed to natural light at their jobs with those who aren’t. The window workers scored better on common self-report health and sleep surveys.  More importantly, they also slept 46 minutes more a night, on average, as measured by a sleep monitor. The findings will be reported in the Journal of Clinical Sleep Medicine.

The study, led by an architect at the University of Illinois, found that 27 workers who sat in windowless offices (or so far from a window as to get no natural light) scored worse than 22 workers who did get daylight on all eight dimensions of a health survey. The windowless group fared significantly worse on two particular areas, including “vitality.” Workers without daylight exposure also showed worse overall sleep quality on a well-established self-report sleep index.

Next:
Pediatricians: Teenagers Need To Sleep In