Poor Night’s Sleep? Maybe a Full Moon is to Blame 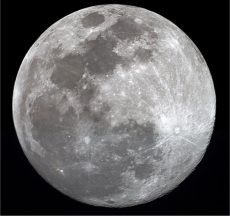 For thousands of years, people have blamed many things on the full moon … anything from bad behavior to the tendency to turn into a werewolf.  Now, research is pinning another problem in the big white orb in the sky — poor sleep.

Swiss scientists were originally studying the sleep patterns of 33 subjects to see if they varied due to age and gender.  The subjects slept in darkened rooms and were unaware of the reason for the study.  Researchers got the idea of checking to see if there was any difference in sleep during nights with full moons, and were surprised at what they found.

They discovered that during a full moon, participants took on average five minutes longer to fall asleep. They also got 20 fewer minutes of sleep overall compared to their sleep when the moon wasn’t full. Brain activity indicative of deep sleep dropped by 30 percent during the full moon.

The subjects had measurably lower levels of melatonin, a hormone known to regulate the sleep and wake cycles. The participants also reported their sleep was poorer when the moon was full, despite not being able to see the moon from their rooms. The researchers called the study the first reliable evidence that a lunar rhythm can alter sleep structure in humans even when measured in a highly-controlled lab setting.

Next:
Tech in the Bedroom Means Less Sleep for Kids