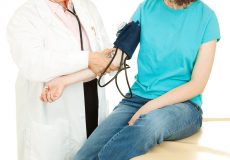 The current recommendations for sleep duration for the average person is around seven to eight hours.  Some people need more and some people can get by just fine on less.  The problem is, however, that new research indicates those who sleep more than eight hours each night run a higher risk of stroke later in life.

The research, which was conducted at the UK’s University of Cambridge, examined the health history of 10,000 people between the ages of 42 and 81. Researchers tracked their sleeping habits over nearly 10 years, in which time 346 of the participants suffered a stroke.

After adjusting for risk factors such as age and gender, people who said they slept for more than eight hours were found to have a 46-percent higher risk. Those who slept for less than six hours, meanwhile, had an 18-percent increased risk, although the researchers said there were so few people in this category that the finding may not be reliable.

Seven out of 10 participants reported sleeping between six and eight hours a day, and one in 10 said they slept for more than eight hours.

The researchers caution that it’s unclear from this study whether sleeping for more than eight hours was actually causing the kind of cardiovascular problems that can lead to stroke, or whether it was merely an indicator or symptom of underlying conditions.

Previous:
Study: Seniors Can Meditate Their Way to Better Sleep

Next:
Poll: Pain is the Biggest Sleep Problem