Study: Seniors Can Meditate Their Way to Better Sleep 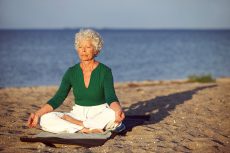 For quite some time, SleepBetter articles have recommended that those who have sleep troubles, particularly issues with a racing mind, learn relaxation techniques to settle down for a better night’s sleep.  New research is taking that one step further, at least for senior citizens, by suggesting a meditation program.

At the end of the study, it was found that the meditators slept better and had better results in related issues such as depression.

Previous research has shown that the movement-based meditation called Tai Chi can help with the quality of older people’s sleep. The form used in the current study is called mindfulness meditation, which is believed to mediate the relationship between perception of things and ideas and appraisal of them.

Researchers say more work was needed to determine whether meditation is a long-term solution to sleep problems.