Sleeping With Your Phone In Your Hand? 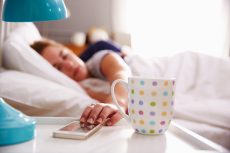 It’s been well documented on this site (here, here, and here, for example) that sleeping with a smartphone nearby is not a recipe for good sleep.  While it has some benefits, such as using the phone as an alarm clock, the negatives outweigh the positives.  Yet, still people continue to do it.  Now, what would you say if we told you that people are now going one step further, and actually trying to sleep with their phones in their hands?

This need to use a phone like a teddy bear is documented in a new survey conducted by Motorola.  The seven-country survey of more than 7,000 people about smartphone habits found that … get this:

While all of these results are unusual, funny, or even a little weird, it’s the first one that obviously concerns us the most.  The best plan is for your smartphone to be outside the bedroom while you’re sleeping.  Notifications, the screen lighting up, and the temptation to check texts, emails or social networks all conspire to keep you from sleeping well.  If sleeping with your phone outside the bedroom is not an option, it should at least be across the room with the screen side down and the notifications turned off.  We shouldn’t have to say this, but we will — your phone should never, ever be in your hand while you’re sleeping.

Next:
Could Side Sleeping Reduce Alzheimer’s Risk?