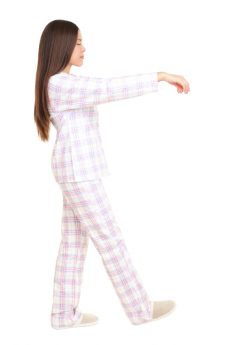 A new study of sleepwalkers found an intriguing paradox: Although sleepwalkers have an increased risk for headaches and migraines while awake, during sleepwalking episodes they are unlikely to feel pain even while suffering an injury.

Results show that sleepwalkers were nearly 4 times more likely than controls to report a history of headaches (odds ratio = 3.80) and 10 times more likely to report experiencing migraines. Among sleepwalkers with at least one previous sleepwalking episode that involved an injury, 79 percent perceived no pain during the episode, allowing them to remain asleep despite hurting themselves.

The American Academy of Sleep Medicine reports that sleepwalking — or somnambulism — is a common sleep disorder that affects up to 4 percent of adults.

“Our most surprising result was the lack of pain perception during the sleepwalking episodes,” said principal investigator Dr. Regis Lopez, psychiatrist and sleep medicine specialist at Hospital Gui-de-Chauliac in Montpellier, France. “We report here, for the first time, an analgesia phenomenon associated with sleepwalking.”

Study results are published in the Nov. issue of the journal Sleep.

The researchers conducted the cross-sectional study of 100 healthy control subjects and 100 patients with a diagnosis of sleepwalking, including 55 males and 45 females. Sleepwalkers had a median age of 30 years. Daytime pain complaints were evaluated by a clinician and self-report questionnaires, which assessed lifetime headache frequency and headache characteristics.

Forty-seven sleepwalkers reported having experienced at least one injury during a sleepwalking episode. Only 10 reported waking immediately due to pain; the other 37 perceived no pain during the episode, but felt pain later in the night or in the morning.

For example, one patient sustained severe fractures after jumping out of a third-floor window while sleepwalking but didn’t feel the pain until after waking up later in the night. Another patient broke his leg during a sleepwalking episode in which he climbed onto the roof of his house and fell down, but he didn’t wake up until morning.

“Our results may help to understand the mechanisms of the sleepwalking episodes,” said Lopez. “We hypothesize that a dissociate state of arousal may modify the components of sleep-wake behavior, consciousness, and also pain perception.

Next:
Therapy Better Than Counting Sheep for Chronic Pain