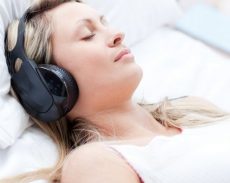 White noise machines make sounds that recreate nighttime in the woods, oceans lapping at the beach, or even vacuum cleaners.  Scientists in Germany, however, say they have found that sounds coming from within your own body may improve your memory and help you sleep better.

Slow oscillations in brain activity occur during slow-wave sleep and are critical for retaining memories. This study found that playing sounds synchronized to the rhythm of those oscillations enhances the oscillations and boosts memory.

The findings suggest an easy and noninvasive way to enhance memory, according to the authors of the study, which was published online April 11 in the journal Neuron.

Researchers from the University of Tubingen conducted their tests on 11 people who slept on different nights. When exposed to stimulating sounds that were in sync with the brain’s slow oscillation rhythm, the participants were better able to remember word associations they had learned the evening before.

Sound stimulation out of sync with the brain’s slow oscillation rhythm was ineffective in improving memory.

Source: US News and Healthday