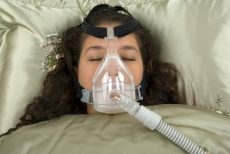 People with a condition that causes them to stop breathing in their sleep could be helped by new research.

Scientists have gained fresh insights into the signals that regulate breathing during sleep, when oxygen levels are low.

The study could lead to new treatments for the condition called central sleep apnea – which occurs during sleep disordered breathing and is linked to obesity and type 2 diabetes.

It could also lead to new interventions that help people adapt to sleeping at higher altitudes, where reduced oxygen levels can cause sleep disordered breathing even in fit and healthy people.

Central sleep apnea occurs when there is a breakdown in the signals that instruct the body to breathe.

Researchers led by the University of Edinburgh’s Centre for Integrative Physiology used genetically modified mice to show that an enzyme called AMPK helps us to breathe faster when oxygen levels are low.

These mice do not produce AMPK in the specialised cells that send signals to support breathing when oxygen availability falls.

The team found that the animals showed similar symptoms to people with central sleep apnea – failing to breathe faster in response to low oxygen environments. The animals are otherwise healthy and show no breathing difficulties under normal conditions.

Professor Mark Evans, of the University’s Centre for Integrative Physiology, said: “Our findings identify exciting new avenues for the treatment of sleep disordered breathing, because drugs that mimic AMPK activation could restore normal breathing patterns in people suffering from this disease. Mice with AMPK deficiencies could also prove useful for helping us to identify such therapies.”