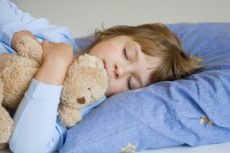 Many of the studies discussed here at SleepBetter.org refer to problems and issues that can be caused by not sleeping enough.  This one, however, has some potentially good news for parents in the U.S.  According to new research conducted at the University of California in Los Angeles, children in the United States get the proper amount of sleep.

A graduate student conducting the study, published in the Archives of Pediatrics and Adolescent Medicine, said she looked into the issue because there has been concern that U.S. kids are getting too little sleep.  Insufficient sleep has been linked to everything from behavior problems to heart health risks.

How much should your child be sleeping? Click here for SleepBetter recommendations.

The research team found that until their second birthday, babies in the study slept an average of 12 to 14 hours during each 24-hour period.  By age four that had dropped to about 11 hours of sleep and by age 10, to 10 hours. By age 16, kids were getting an average of about nine hours of sleep per night.  The findings suggest most kids’ sleep habits are in step with government recommendations.

The lead researcher admits that parent reporting of how much a child sleeps is not perfectly accurate, and they often can’t describe the quality of sleep the child receives.

Next:
Report: Drowsy Driving Continues to be a Problem