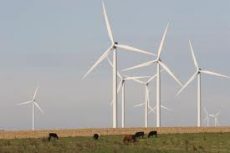 Those who live near turbine wind farms have complained for years about the noise, and how it’s keeping them from getting a good night’s sleep.  Now, a new study confirms that it is indeed causing a problem.

The research, by British and American scientists, was conducted in Maine.  It compared a group of people living within a mile of a wind farm with one further away.  The researchers found a “clear and significant” difference in the quality of sleep enjoyed by both.

Published in the journal Noise and Health, it is the first to show a clear relationship between wind farms and health and well being.

Complaints about wind farms have been prevalent in Britain.  Planning guidance there allows a night-time noise level from wind farms of 42 decibels – equivalent to the hum of a refrigerator. As a result, wind turbines are not allowed to be built within 380 yards of homes.  Since the regulations were drawn up more than 15 years ago, however, farms and the turbines themselves have gotten larger.