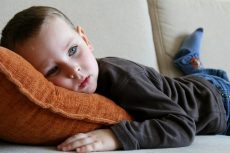 Once again, researchers are warning us that television and childhood sleep don’t mix very well.

Propping up previous studies, scientists in Massachusetts followed more than 1,800 children from ages six months to nearly eight years. Mothers kept track of how much time each day infants were in a room where a television was on, how much time older children watched television daily, whether children ages four to seven slept in a room where a TV was present and their child’s average daily amount of sleep.

Researchers discovered that over the course of the study, each additional hour of television viewing was associated with seven fewer minutes of sleep daily, with the effects appearing to be stronger in boys than in girls.

Racial and ethnic minority children were much more likely to sleep in a room where a television was present, and among those children, the presence of a bedroom TV reduced average sleep around a half-hour per day.

The research was the first multi-year study on the impact of television on childhood sleep patters.  It was published in the journal Pediatrics.

Next:
Sleeping Without Disturbance Helps Your Memory