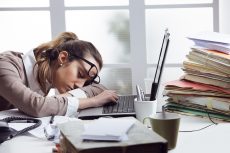 It’s no shock that a lot of us don’t get near the amount of sleep we need, but sometimes a study comes along that quantifies it in a way that reminds us that changes need to be made.

Most experts recommend adults get between seven and nine hours of sleep.  The wide span accounts for vast differences in the amount that individuals need, but most people need at least seven hours of shuteye.

A new survey, commissioned by UK-based office products company CMD, asked 2,000 UK office workers about their sleep patterns and opinions on sleep.  The average amount of sleep received by the respondents was about six-and-a-half hours.  Only about five percent sleep for at least eight hours each night.  On the other end of the spectrum, more than five percent are sleeping less than five hours per night.

Lack of sleep can bring about a general decrease in alertness and performance, memory and cognitive impairment, stress in relationships, raised blood pressure, heart attacks, depression and obesity.

Here are some other findings of the survey:

Do some of these numbers sound like you?  Get advice on how you can sleep better by reading articles from our Sleep Tips section.

Previous:
At Risk for Sleep Apnea? Learn to Play the Flute!

Next:
Sleep Problems Can Lead to Less Pain Tolerance