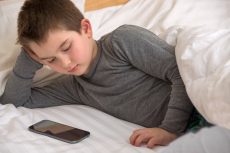 New research shows that kids who unplug before bed not only sleep better, but also sleep a lot more.

Researchers analyzed surveys on sleep and technology habits completed by 738 students at seven randomly selected schools in the Midlands region of England in 2010.  They found that kids ages 11 to 13 slept significantly less when they frequently communicated on a cell phone, surfed the Internet, played video games, watched television, listened to music or used a computer to study before going to bed.  In fact, those kids who were “plugged in” reported sleeping an average of an hour less on school nights than those who rarely used computers.

Not only did they sleep less, but those kids who regularly played video games or listened to music at bedtime also had significantly more difficulty falling asleep.

Social networking on sites such as Twitter, Facebook and Instagram was associated with the biggest loss of sleep. Those who said they usually connected to friends online before getting into bed reported sleeping the least – an average of 8 hours and 10 minutes a night – compared with 9 hours and 2 minutes among those who never connected.

The reasons for the findings are fairly obvious.  Devices such as computers, tablets and smartphones emit a type of light that tells the brain it’s time to be awake.  In addition, activities like video games and even chatting can excite the brain and make it hard to settle down at bedtime.  In the end, to help your child sleep better, have them put their electronic devices outside of their rooms at least an hour before bedtime.

Previous:
Teen Sleeping Outside for a Year — Even in the Winter [VIDEO]